In the early morning hours of June 6th, 1944, Amin Isbir, the oldest sailor of the 6th Naval Beach Battalion, Platoon C-8, was onboard LCI-L #88  along with soldiers of the 1st Infantry Division and those of the 5th Special Engineers Brigade heading on a south eastern course towards Omaha Beach, Easy Red One sector.  An LCI-L or Landing Craft Infantry Large, carried about 200 troops and their cargo.  At 7:35 in the morning, down the port side ramp, great uncle Amin followed Ensign Joe Vaghi, Unit Commander Lt. Cmdr Eugene Carusi, Ensign Jack Reich and Coxswain Ed Marriott while others in the platoon, Lewis “little boats” Strickland, John Hanley, Eddie Gorski, Frank Hurley, Bob Walley, Harold Roderick, Ray Castor, John Shrode, Andy Chmiel, John Dietzman, George Abood, David Catallo, Bob Millican, Norman Paul, Emil Candelaria, Al Silva, Howard Hampton, “little Dr. Russell Davey” and the remainder of C-8 platoon approached the beach without incident.  During a June 2005 phone interview that I had with Ensign Vaghi, he said to me, “Smooth sailing, all the way in”.  Ensign Vaghi was a “Beach Master” for a sector on Omaha Beach called "Easy Red One".

Ensign Vaghi continues... “200 yards offshore, the boat came to a halt and started disembarking the troops down the port and starboard side ramps.  All was going good and then bam...an 88mm shell took off the starboard side ramp and killed many of the soldiers in a haze of red smoke.”  Not knowing the extent of the damage, Vaghi his platoon of sailors dressed as soldiers moved down the remaining ramp under increasing enemy fire.   Despite the increasing danger, the members of Vaghi's platoon continued with their assignments of setting up medical, communication and hydrographic duties (the setting up of safe shipping lanes and beach operating zones).  The entire group now ashore, an Army officer approached Ensign Vaghi saying which items he needed the  most for his infantrymen.  Using a Walkie Talkie, Ensign Vaghi would signal the ship and it would be brought down to assist the infantry.  Despite the continued shelling and random round that would rain down onto the beach, the sailors continued to support the infantry.

At about 8:45, Uncle Amin and Ensign Vaghi were working to clear the wounded and dead from lanes they were trying to establish.  Moving a fallen soldier onto a stretcher, a kneeling Ensign Vaghi and standing Amin prepared to move the body out of the way.  “All of a sudden there was a tremendous explosion!”  Ensign Vaghi was knocked unconscious.  Great Uncle Amin wouldn't be so lucky.  “What happened, as I later found out, was that some 5 miles from the landing beaches the Germans had a railway gun.”  These guns were capable of lobbing a shell nearly 16 miles.  “The shell from that gun landed nearby, hitting a jeep that flew into the air.  Your uncle was killed when that jeep landed right on top of him.  He never knew what hit him.”  Uncle Amin was dead.  A few moments later Ensign Vaghi regained his senses and noticed that the explosion also set a nearby jeep on fire.  This jeep was full of ammo, grenades, and gasoline and was surrounded by wounded men.  At great risk to his own life, he and another man unloaded the jeep and thus spared the lives of all those men.

Watch and listen to Coxswain Ed Marriott and Seaman Bob Giguere talk about my Great Uncle's final moments.  The interviews are compliments of the fine work of Tom Beaty and his Witness to War Website.  You will need to search for them by last name on his site.   My many thanks for Tom's great work in honoring our nations greatest generation and for allowing me to share the memories of two of our nations heroes. 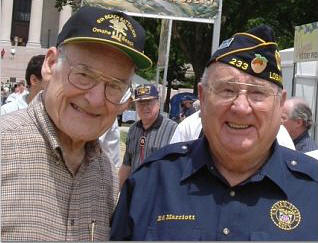 Lt. J. Russell Davey, who led the Navy Medical Detachment on D-Day, followed Beachmaster Vaghi off of LCI-L 88.  Dr. Davey's son, Ken Davey, has also assembled an exhaustive tribute to his father and to the mission of the 6th Naval Beach Battalion.  By clicking on the banner below the web site will open in a new window.  Please continue my Uncle's story below the banner.

A few weeks later Ensign Vaghi had been told by intelligence officers that the German’s targeted the location of where he and Amin were by homing in on broadcasts from Vaghi's field radio back to the ship.  “How they did that, I don’t know, but that is what they told me.”  At home in McKeesport Pennsylvania, news of Amin's death reached the Isbir Family.  Nearly a year later Ensign Vaghi was awarded the Bronze Star for saving the lives of those wounded soldiers and sailors which surrounded that Jeep which was ablaze on D-Day morning. 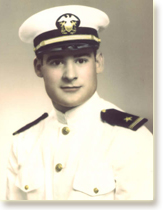 During my interview with Ensign Vaghi, he told me a lot about my great uncle.  “Amin told me that he felt that he would never get home again to see his Little Woman,” his common law wife, whose name he did not recall.  “He was a very religious man, very smart, and knew so much about being a sailor.  He was the oldest of all the guys onboard and had the respect of all the other younger sailors.  We had the best Company because of Amin!”    Ensign Vaghi told me that Amin used to call him Mr. Vogi.  In fact as our conversation continued, I too called him Vogi by mistake.  Given the seriousness of our conversation, we laughed aloud together.  I told him that I would continue to call him Mr. Vogi.  It would be like my Uncle Amin was speaking to him again.  Great uncle Amin Isbir was 36 years old. 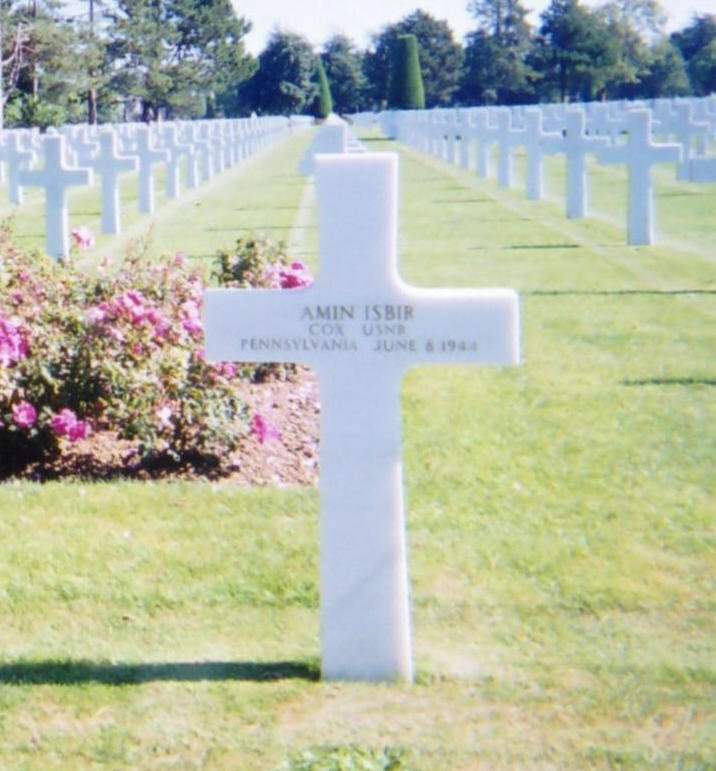 When I first began to research my great uncle, I found that his tombstone in Normandy indicated the he was killed on June 8th;  yet history knew otherwise.  I asked Ensign Vaghi if he knew of this and asked him how such a thing could happen.  “There simply wasn’t a way to take care of the fellows that were killed like we wanted to.  We had a job to do.  Two days later, the graves registration units tagged all of those boys Killed in Action on June 8th.”    I have pledged my assistance in setting the story straight by getting my uncle’s record changed.  Once accomplished my great uncle may lie in peace.  (UPDATE: The U.S. Navy corrects my great uncles date of death as of April 28th, 2008.  Read the story.)

Great uncle Amin was awarded the Purple Heart and the family received statements from the French Government and President Roosevelt honoring his service and sacrifice.  The French Government also awarded him and all the members of the 6th Naval Beach Battalion the French Croix de Guerre for bravery.  In 2000, the 6th Naval Beach Battalion was finally awarded a Presidential Unit Citation.  Ensign Vaghi and Ed Marriott received the Citation personally.

Uncle Amin was the first of 9 children to be born in the United States.  His brother Espir, better known as Izzy was like a father to me.  His brother J.B., my Step Grandfather, supported my mother and Grandmother during the depression and throughout the war years.  His sister, my Great Aunt Della and I just met as adults for the first time in 2005.  She couldn’t believe I was so interested in what happened to her brother.  Until I told her what Ensign Vaghi told me about my Uncle’s final moments, she too never knew the complete story.  We now share a moment in history, a look back in time, reflecting upon his life, a life cut so short for the freedom of others.  Sadly, my Aunt Della passed away during the winter of 2006 and would never bare witness on earth as to the success of correcting her brothers records and head stone.

63 years removed from D-Day, and at the 6th Naval Beach Battalion reunion held in June 2007, I was to learn that my great uncle was the only man killed on D-Day who was a member of C-8.  Andy Chmiel, a pharmacist's mate and C-9 signalman Red O'Nines witnessed my great uncle's body underneath of a vehicle slightly larger than a jeep.  These men confirmed that this vehicle was a weapon's carrier. 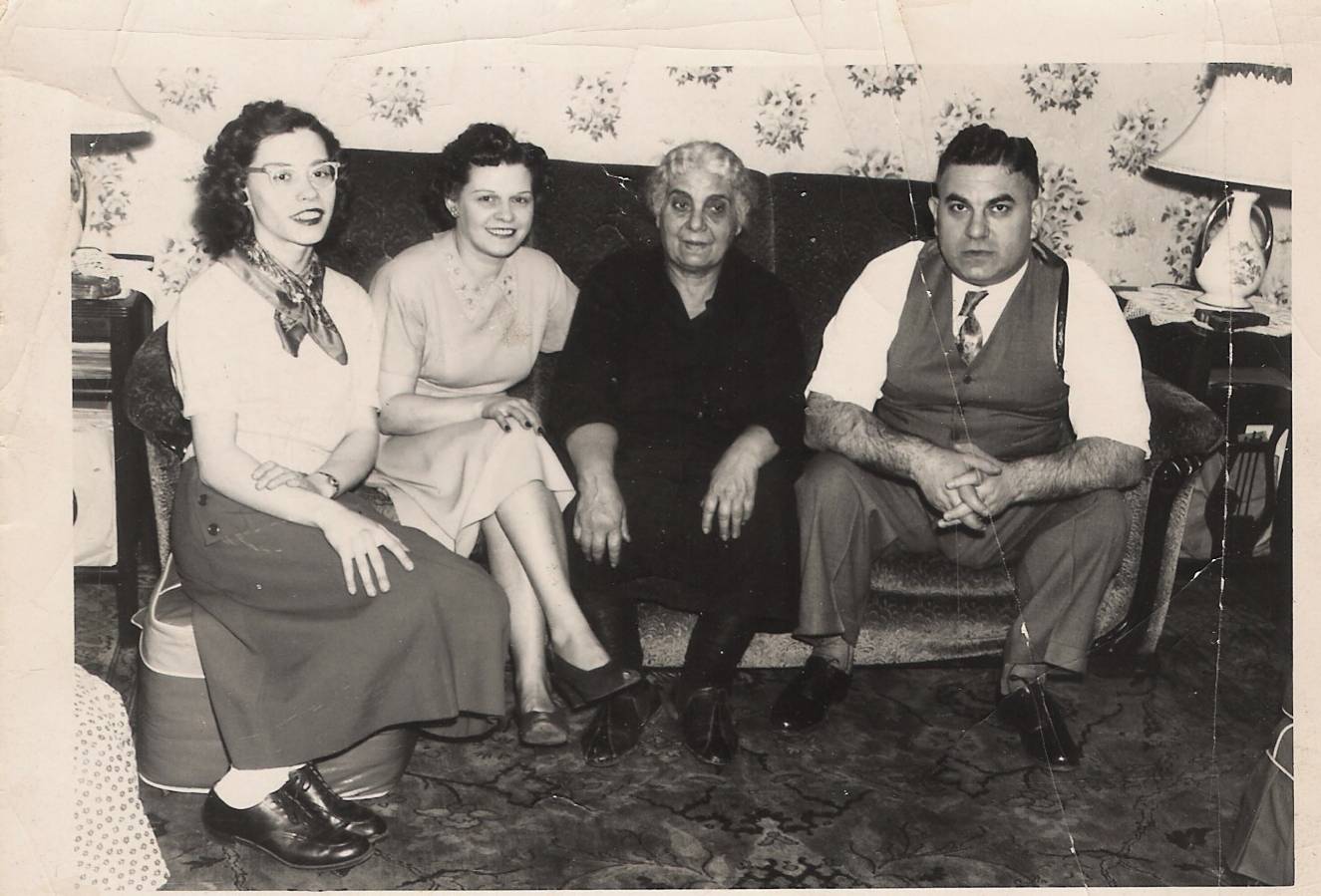 My mother, Grandmother Frances, Great Grandmother Mary, and J.B.
Mary wore black from the time she learned of her son Amin's death.
My mom says that she was never seen to wear any other color. 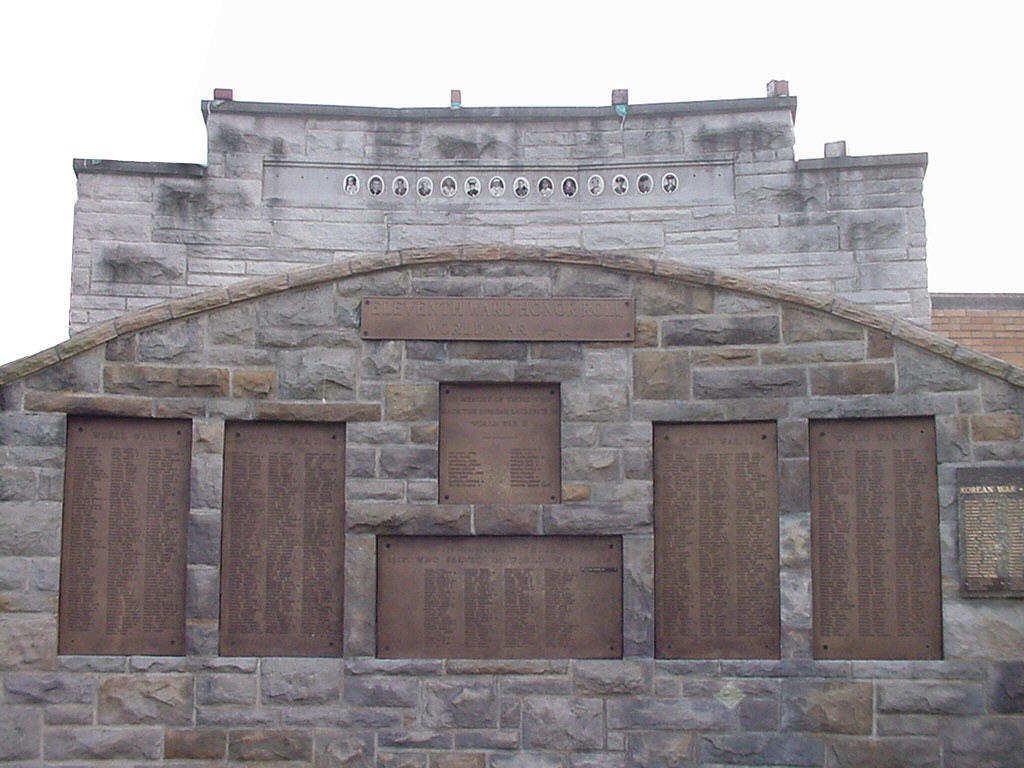 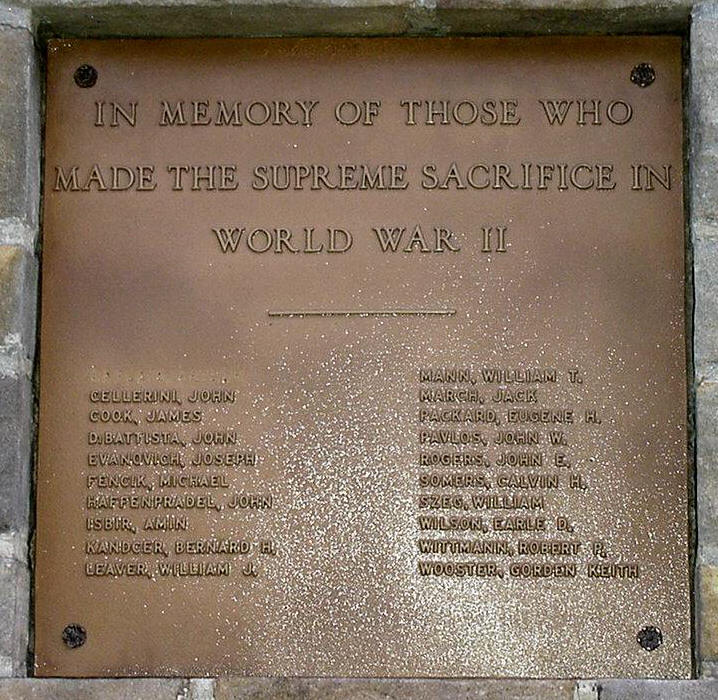 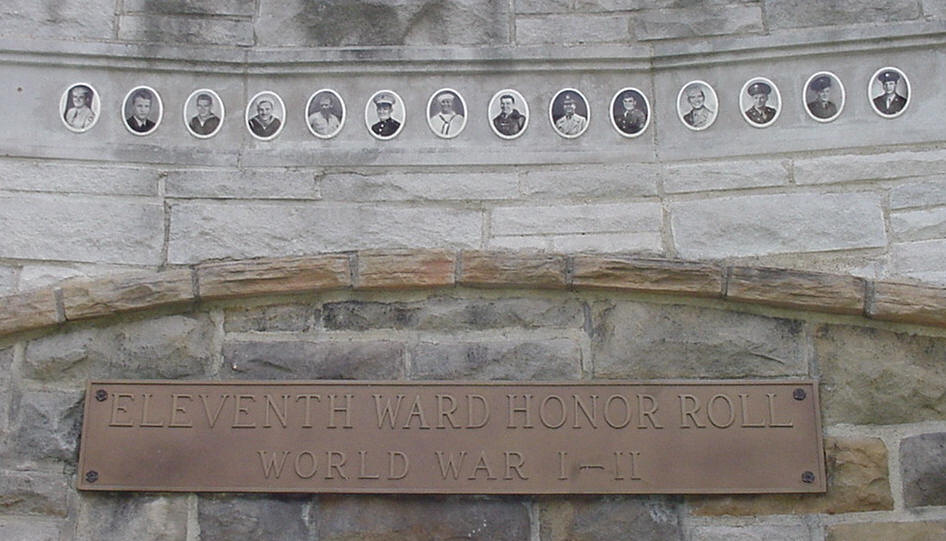 Names and photos of the fallen crown the Memorial where unfortunately 5 portraits have disappeared over time. 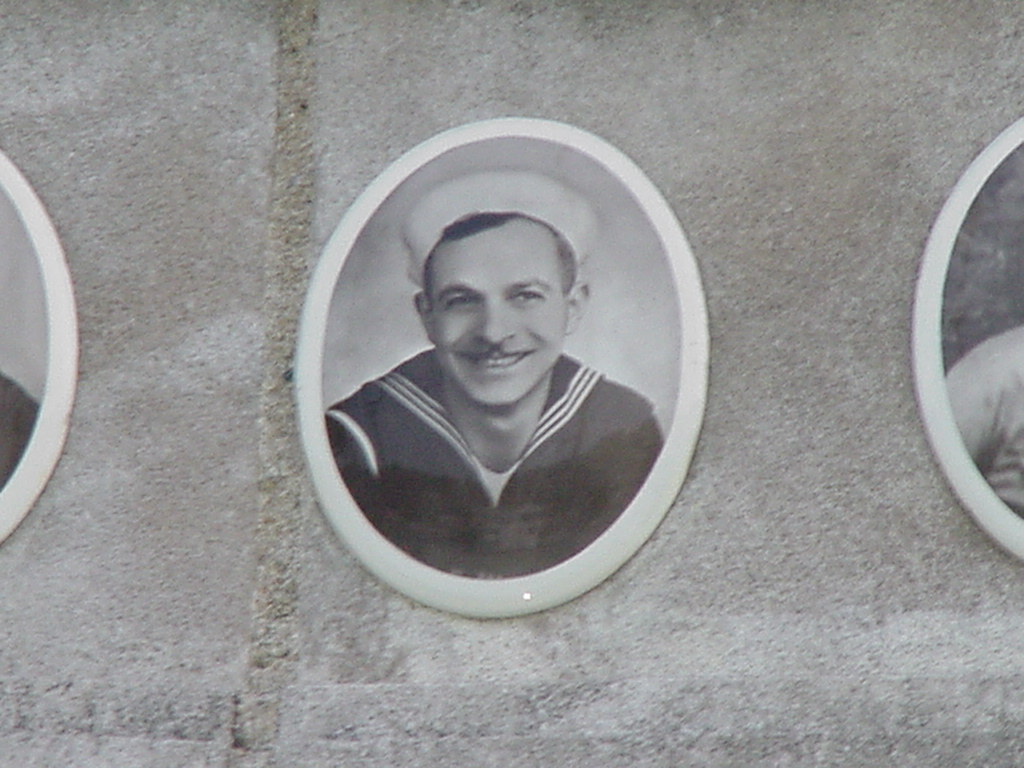 
While visiting my mother in Florida in the fall of 2004, I attended a WWII living history event held at Miami Beach hosted by members of the 2nd Infantry Division WWII Reenactors.  As a reenactor myself I was eager to attend.  Although I didn't have any of my own gear with me, I did have my photo album filled with original war time and reenactment photos.  While visiting the camp, I began to show the men the album and specifically the photos inside of the family members who had served in WWII.  One photo in particular caught the eye of the group's medic.

The photos in the album are arranged in such a way to tell a story, going from one side of the family to the other.  The transition page from one grand parent to another was a particular photo showing my father standing with great uncle's John and Frank Gabersek father, John Gabersek Senior, and J.B. Isbir, second husband to my grandmother, Frances Gabersek Povirk Isbir.   J.B. had been crippled early in life and his crutches were visible in most photos taken of him.

“Who is the guy on the crutches?” the medic asked.   I replied, “He was my step grand-pap, J.B.”  The soldier said. “J.B. Isbir of McKeesport Pennsylvania?”  I replied, “How did you know that?”  Although not exactly sure at that moment, as it turns out his grandmother and J.B. were cousins.  We looked at each other and couldn’t believe it.  After a call back to my mom and Jim's parents we quickly figured out the relationship.  However, that wasn't the first time Jim and I had met.  Jim's family made yearly trips to McKeesport from Cleveland most summers, the last time may have been in 1972 after the passing of J.B.  Reunited after 30 some years, my cousin Jim Ameen and I are now close friends.  How amazing it is that we would meet again 1400 miles later on the sands of Miami Beach?  Our passion for honoring our families service in WWII brought us back together and renewed the family ties which had wavered since J.B.'s death.  To add to this amazing story, Jim owns a WWII Weapon's Carrier, the same sort of vehicle which fell upon Amin on D-Day.  Words cannot convey what an honor it is for Jim and I to be able to speak so proudly of our great uncle's sacrifice on that "Day of Days".  God bless and thank you uncle Amin from liberty-loving people everywhere.  Time will not dim the glory of your deeds. 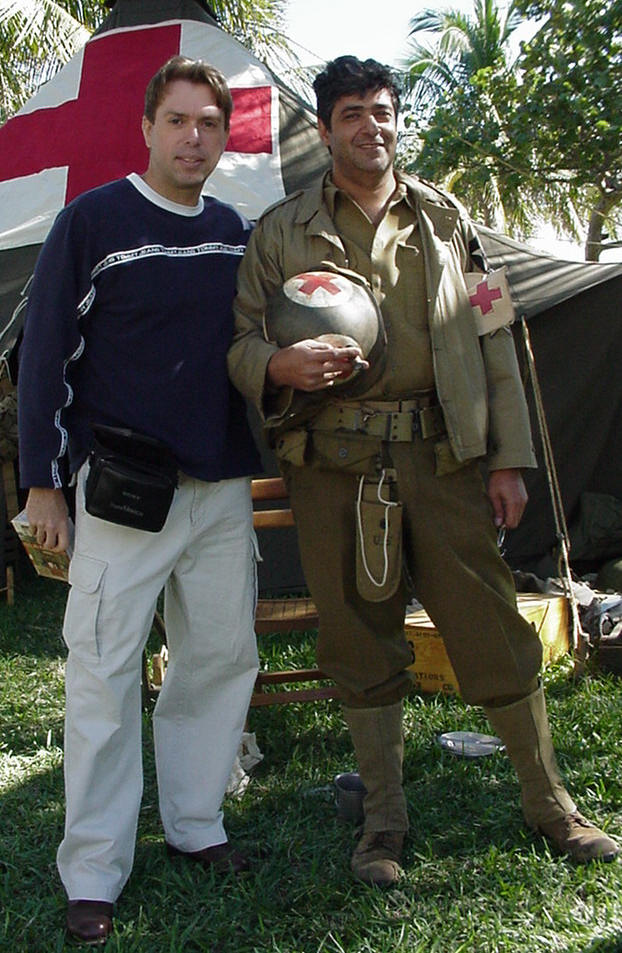