I recently received an email from a special man living in the Netherlands asking me to help locate the family of T. Sgt Cliffe H. Wolfe.  Bart van der Sterren of the Netherlands has been adopting American serviceman's gravesites as a show of appreciation to those who lost their lives fighting for the liberation of his homeland.  He has certainly earned my respect and admiration by taking on such an important and uplifting endeavor.  He is hoping that by highlighting Sgt Wolfe's name on my site may assist him in identifying the family of Sgt Wolfe.  Mr. van der Sterren has adopted the Sergeants grave which is located in Margraten in the Netherlands.

Here's the message I received from Mr. van der Sterren.

In September 2008 I adopted the name of an US soldier who is missing since 17 November 1944. His name is etched on the “Wall off the Missing” at the military cemetery in Margraten in the Netherlands . His name is CLIFFE H WOLFE.  He was born in Michigan; I don’t know where exactly.  His serial number is 36506694 and he served in the 109 INF 28 DIV reaching the rank of Technical Sergeant.  People around here still consider it to be an honour to remember the fallen U.S. soldiers.   For me it is the least I can do to show my gratitude and respect for what so many young men from far over the ocean did for us more than 60 years ago. The adoption of a name on the “Wall of the Missing” means visiting the cemetery on a frequent basis, placing of flowers on special days or occasions (like e.g. Memorial Day or Christmas) and when relatives wish to do so and corresponding with the homeland.  I just started my search for relatives in the US of this soldier so I could sent them pictures of the cemetery and let them know that he is not forgotten.

I hope you can help me and that you can tell me where I can get more information.    Bart van der Sterren 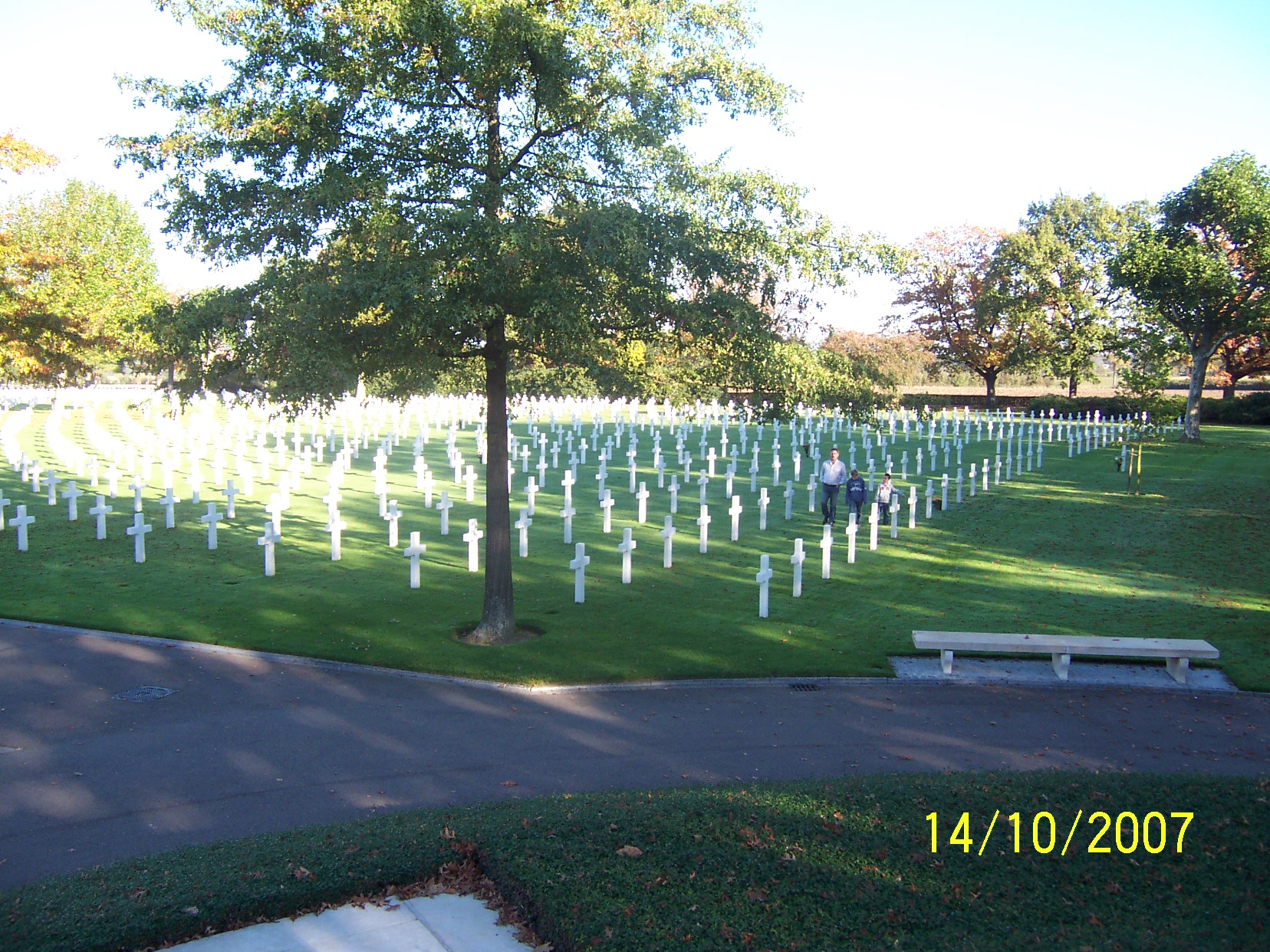 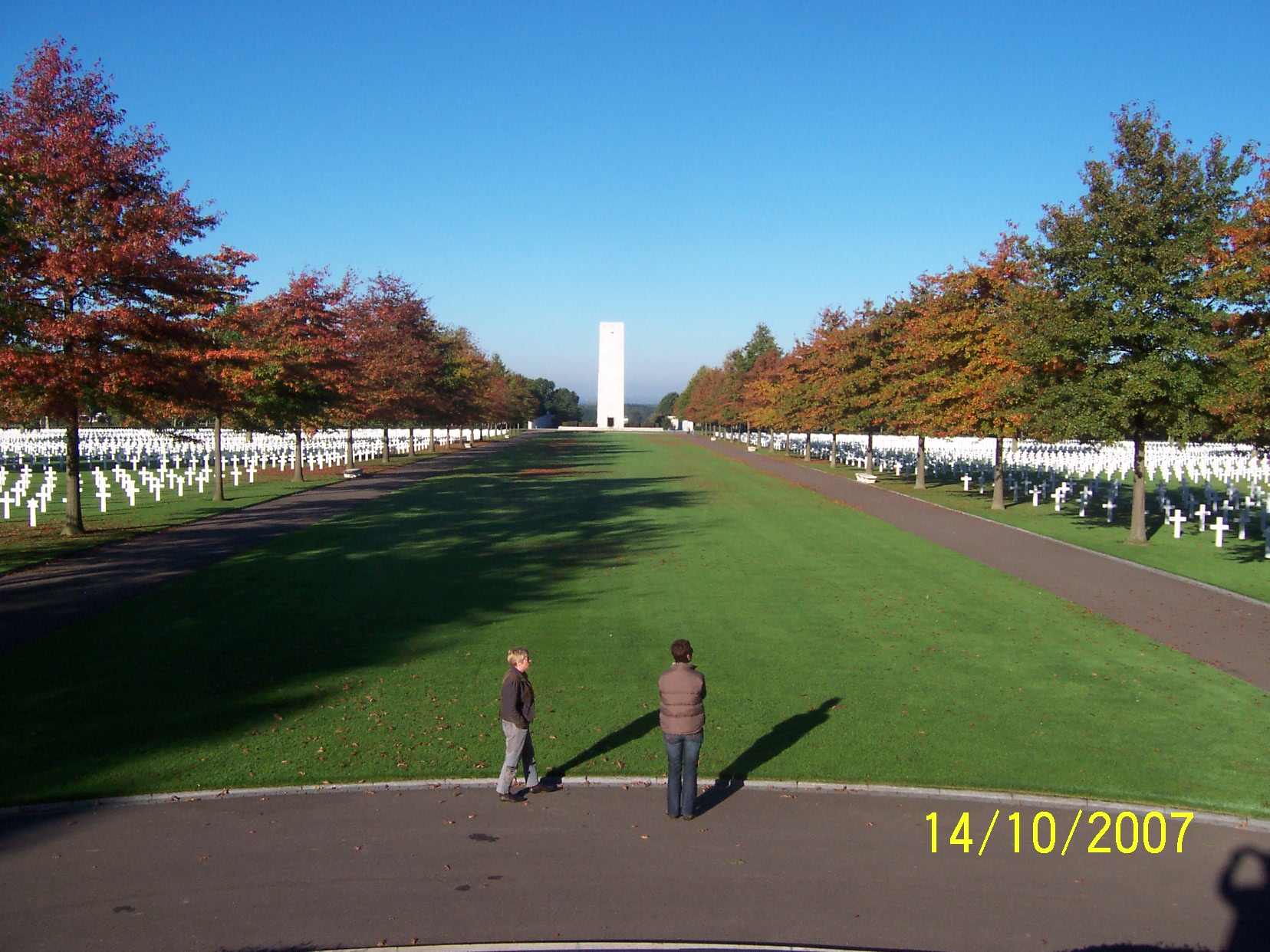 The Cemetery at Margraten - The Netherlands

If anyone reading this page has any information on Sergeant Wolfe, family contact, picture, etc, please contact Mr. Bart van der Sterren and/or myself.  We would love to share the good work of Mr. van der Sterren with all.

Thank you Bart for remembering Sgt. Wolfe and those who gave their lives to restore freedom to the Netherlands!
Please visit the gravesite and story of PFC Hans Bergmayr, Mr. van der Sterren's first sponsored soldier.

UPDATE!  3-21-2009
Bart just informed me that brother Charles who died in a car accident in 1990.
Charles had also 2 daughters Susan Miller and Nancy Humphrey, whereabouts unknown. 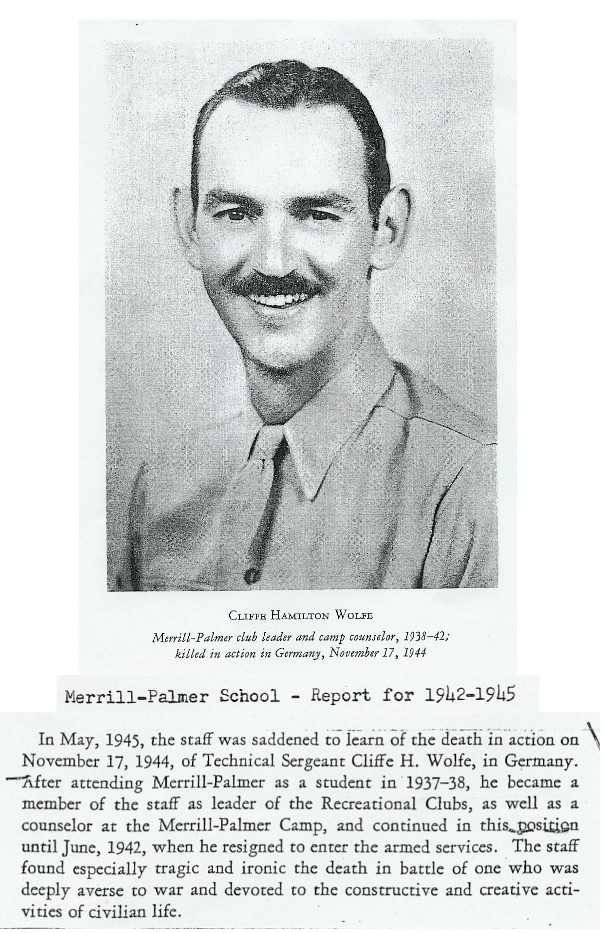 The History of the 28th Division in WWII

On Feb. 17, 1941, the 28th Division Pennsylvania National Guard was ordered into federal service for one year of active duty.  The Japanese attack on Pearl Harbor on Dec. 7, 1941 led soldiers of the 28th to remain on active for the duration of the war. Having conducted specialized combat training in everything from offensive maneuvers in mountainous terrain to amphibious warfare, the Division's intensive training agenda culminated in its deployment to England on Oct. 8, 1943.

After another 10 months of training in England and Wales, the first elements of the Division entered combat on July 22, 1944, landing on the beaches of Normandy. From Normandy, the 28th advanced across western France, finding itself in the thick of hedgerow fighting through towns such as Percy, Montbray, Montguoray, Gathemo, and St.Sever de Calvados by the end of July 1944. The fury of assaults launched by the 28th Infantry Division led the German Army to bestow the Keystone soldiers with the title "Bloody Bucket" Division.

In a movement north toward the Seine in late August, the Division succeeded in trapping the remnant of the German 7th Army through Vorneuil, Breteuil, Damville, Conches, Le Neubourg, and Elbeuf before entering Paris to join in its liberation.

The famous photographs of American troops before the Arc de Triomphe, marching in battle parade down the Champs Elysees, shows the men of 1st Battalion, 110th Infantry Regiment, 28th Infantry Division. With no time to rest, the Division moved on to fight some of the most bloody battles of the War the day following the parade.

The 28th continued to advance through the Forest of Compeigne, La Fere, St. Quentin, Laon, Rethel, Sedan, Mezieres, Bouillon and eventually across the Meuse River into Belgium. The Keystone soldiers averaged 17 miles a day against the resistance of German "battle groups." The city of Arlon, Belgium, fell to a task force as the Division fanned out into Luxembourg in early September. On September 11, 1944, the 28th claimed the distinction of being the first American unit to enter Germany.

After hammering away in assaults which destroyed or captured 153 pillboxes and bunkers, the Division moved north toward the Siegfried Line, clearing the Monschau Forest of German forces. After a brief respite, the Keystone soldiers made another move northward to the Huertgen Forest in late September. Attacks in the forest began November 2, 1944. The 28th Infantry Division stormed into Vossenack, Kommerscheidt and Schmidt amid savage fighting and heavy losses.

By November 10, the 28th began to move south, where it held a 25-mile sector of the front line along the Our River. It was against this thinly fortified division line that the Germans unleashed the full force of their winter Ardennes "blitzkrieg" offensive.

Five Axis divisions stormed across the Our River the first day, followed by four more in the next few days. Overwhelmed by the weight of enemy armor and personnel, the Division maintained its defense of this sector long enough to throw Von Runstedt's assault off schedule. With allied forces able to a move in to counterattack, the "Battle of the Bulge" ensued, inflicting heavy losses on the enemy forces.

Having sustained a devastating 15,000 casualties, the 28th withdrew to refortify.  But within three weeks, the Division was back in action. By January 1945, Division soldiers had moved south where they served with the French First Army in the reduction of the "Colmar Pocket. The 109th Infantry Regiment was awarded the French Croix de Guerre for its action which helped lead to the liberation of Colmar, the last major French city in German hands. By February 23, 1945, the Division returned north to the American First Army. The 28th was in position along the Olef River when an attack was launched on March 6, 1945, carrying the Division to the Ahr River. Schleiden, Germund, Kall, Sotenich, Sistig and Blankenheim all fell in a raid advance. By early April, the Division moved west of the Rhine and took up occupation duties in the area north of Aachen along the Holland-German border. Permanent occupation came two weeks later at the Saurland and Rhonish areas. In early July 1945, the 28th began its redeployment to the U.S.

The Division was deactivated on December 13, 1945. Five campaign streamers - Normandy, Northern France, Ardennes-Alsace, Rhineland, and Central Europe - were earned during World War II, in addition to the Croix de Guerre.

Nearly 6 decades later, World War Two enthusiasts and historians formed companies of the 110th Infantry Regiment of the 28th Infantry Division. The group formed to recreate, educate, and enlighten the public to the events previously recorded above. It is our honor to pay tribute in a small way to those who fought so valiantly to preserve freedom and liberty for generations to come. Based in the Western Pennsylvania and Eastern Ohio the group boasts a membership of nearly 30 men. Some are even active duty members of our current Armed Forces serving the cause of liberty and freedom in our time. May all of those who so proudly wore and wear the flag of the United States, carry with them the torch of freedom for millions of Patriots across a thankful nation.

http://groups.yahoo.com/group/thebloodybucket/ <<< === For Veterans, Friends, and Reenactors

www.bloodybucket.com  <<<=== An all inclusive website for the 28th Division Reenactors