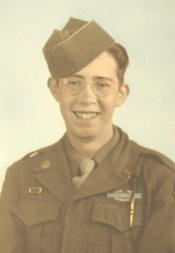 Arriving in the European theater in January of 1945, Don found himself thrown into the Battle of the Bulge, a baptism of fire by ice and snow.

Don and I became immediate friends a couple of years ago after he and I exchanged emails.  Unbelievable some would say because Don actually served with the same division, same regiment, and same company as the reenacting unit that I am a member of.  Don is a Bronze Star recipient, and although I will not go into the details regarding the circumstances, his courage and dedication to serving our nation stands as testimony to all the boys sent overseas who returned as men. 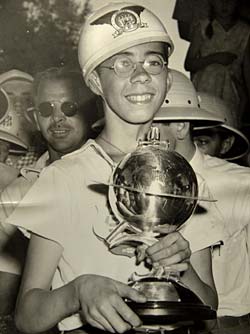 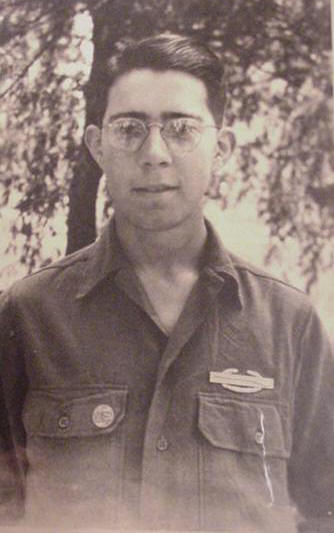 Don was on a 3 day pass in France when the war ended,
no doubt one of the luckiest guys in the army.....

The History of the 28th Division in WWII

On Feb. 17, 1941, the 28th Division Pennsylvania National Guard was ordered into federal service for one year of active duty.   The Japanese attack on Pearl Harbor on Dec. 7, 1941 led soldiers of the 28th to remain on active for the duration of the war.  Having conducted specialized combat training in everything from offensive maneuvers in mountainous terrain to amphibious warfare, the Division's intensive training agenda culminated in its deployment to England on Oct. 8, 1943.

After another 10 months of training in England and Wales, the first elements of the Division entered combat on July 22, 1944, landing on the beaches of Normandy.  From Normandy, the 28th advanced across western France, finding itself in the thick of hedgerow fighting through towns such as Percy, Montbray, Montguoray, Gathemo, and St. Sever de Calvados by the end of July 1944.  The fury of assaults launched by the 28th Infantry Division led the German Army to bestow the Keystone soldiers with the title "Bloody Bucket" Division.

In a movement north toward the Seine in late August, the Division succeeded in trapping the remnant of the German 7th Army through Vorneuil, Breteuil, Damville, Conches, Le Neubourg, and Elbeuf before entering Paris to join in its liberation.

The famous photographs of American troops before the Arc de Triomphe, marching in battle parade down the Champs Elysees, shows the men of 1st Battalion, 110th Infantry Regiment, 28th Infantry Division. With no time to rest, the Division moved on to fight some of the most bloody battles of the War the day following the parade.

The 28th continued to advance through the Forest of Compeigne, La Fere, St. Quentin, Laon, Rethel, Sedan, Mezieres, Bouillon and eventually across the Meuse River into Belgium.  The Keystone soldiers averaged 17 miles a day against the resistance of German "battle groups."  The city of Arlon, Belgium, fell to a task force as the Division fanned out into Luxembourg in early September.  On September 11, 1944, the 28th claimed the distinction of being the first American unit to enter Germany.

After hammering away in assaults which destroyed or captured 153 pillboxes and bunkers, the Division moved north toward the Siegfried Line, clearing the Monschau Forest of German forces. After a brief respite, the Keystone soldiers made another move northward to the Huertgen Forest in late September.  Attacks in the forest began November 2, 1944.  The 28th Infantry Division stormed into Vossenack, Kommerscheidt and Schmidt amid savage fighting and heavy losses.

By November 10, the 28th began to move south, where it held a 25-mile sector of the front line along the Our River.  It was against this thinly fortified division line that the Germans unleashed the full force of their winter Ardennes "blitzkrieg" offensive.

Five Axis divisions stormed across the Our River the first day, followed by four more in the next few days.  Overwhelmed by the weight of enemy armor and personnel, the Division maintained its defense of this sector long enough to throw Von Runstedt's assault off schedule. With allied forces able to a move in to counterattack, the "Battle of the Bulge" ensued, inflicting heavy losses on the enemy forces.

Having sustained a devastating 15,000 casualties, the 28th withdrew to refortify.  But within three weeks, the Division was back in action. By January 1945, Division soldiers had moved south where they served with the French First Army in the reduction of the "Colmar Pocket. The 109th Infantry Regiment was awarded the French Croix de Guerre for its action which helped lead to the liberation of Colmar, the last major French city in German hands. By February 23, 1945, the Division returned north to the American First Army. The 28th was in position along the Olef River when an attack was launched on March 6, 1945, carrying the Division to the Ahr River. Schleiden, Germund, Kall, Sotenich, Sistig and Blankenheim all fell in a raid advance.  By early April, the Division moved west of the Rhine and took up occupation duties in the area north of Aachen along the Holland-German border. Permanent occupation came two weeks later at the Saurland and Rhonish areas. In early July 1945, the 28th began its redeployment to the U.S.

The Division was deactivated on December 13, 1945. Five campaign streamers - Normandy, Northern France, Ardennes-Alsace, Rhineland, and Central Europe - were earned during World War II, in addition to the Croix de Guerre.

Nearly 6 decades later, World War Two enthusiasts and historians formed companies of the 110th Infantry Regiment of the 28th Infantry Division. The group formed to recreate, educate, and enlighten the public to the events previously recorded above. It is our honor to pay tribute in a small way to those who fought so valiantly to preserve freedom and liberty for generations to come. Based in the Western Pennsylvania and Eastern Ohio the group boasts a membership of nearly 30 men. Some are even active duty members of our current Armed Forces serving the cause of liberty and freedom in our time. May all of those who so proudly wore and wear the flag of the United States, carry with them the torch of freedom for millions of Patriots across a thankful nation.

http://groups.yahoo.com/group/thebloodybucket/ <<< === For Veterans, Friends, and Reenactors

An all inclusive website for the 28th Division Reenactors