Uncle Johnnie and I visit the Vietnam Veterans Wall
and the Lincoln Memorial.  This was our last visit to D.C. 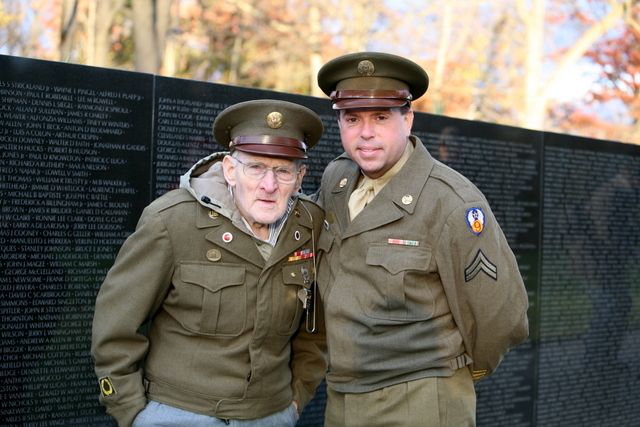 The above photos were sent to me by a man also taking pictures at the Vietnam Memorial.  I have since lost his contact information so I cannot credit him other than saying thank you so very much.  They are outstanding photos to say the least!  They are some of the best ever taken of John and myself.

The details regarding our visit there...  John and I visited the Vietnam Veterans Wall years ago and we had not been back in some time.  With no more handicapped parking spaces at the WWII Memorial, (there are about six!) we circled the mall for another place to visit.  We found a perfect spot within a short walk of The Wall.  What was most special about this day was that this was the first time that my great uncle Steve's uniform, Johnnie's brother in law, had been worn since wars end.  I felt so proud to wear it and it fit like a glove.  Yet not all those at the Memorial were impressed.  The purpose for me dressing in WWII attire is many fold and obviously I am too young looking to have been in service at that time.  I do so cause I am more mobile than John.  While he usually takes a seat on one of the benches around the various memorials I usually stand and give those who will listen a brief rundown on John and the rest of the boys in the family.  In whatever uniform I wear, it grabs peoples attention, so in turn, I can then focus their attention on John.  So, with that being said, I was approached by a man who represented some Vietnam Veteran's group which was selling some literature of some sort.  I was handing out cards to those who stopped and talked to John and I.  The cards have Johnnie's picture on the front and a brief biography of his service and the web address for our soldiersandsailors web site on the back.  "What are you selling?" asked this man.   "Selling?" I replied.  "Nothing sir."  "Your not selling anything?" he asked again.  I replied, "My great uncle and I have visited the WWII Memorial over a dozen times, we educate, inform and allow people get to know about John and the rest of our family who served our nation with honor and pride.  I am handing out picture cards so people can learn more about him."  The man replied, "What's with the uniforms?"  I said to him, "Well this is my great uncle John, Combat Medic, WWII, who served his country for more than 3 years, faced death and the horrors of war."  "And you?"  My name is Eric Montgomery and I am representing my great uncle Steven Simco, Corporal, 422nd Night Fighter Group, Battle of the Bulge veteran, and today is the first time that his uniform has been worn in public for almost 64 years."   I then handed him one of Johnnie's cards and urged him to contact me once he visited the web site.  He walked away and I never heard from him again.  Now the reason I bring this up is this.  In all the times we visited all the places around D.C., we had never been questioned like this by anyone.  It was unnerving and insulting.  Perhaps I shouldn't be wearing a uniform but I do so to call attention to John and to those who paid the ultimate price in their lives and unforgettable memories they carried with them until the passed onto history.  That is and was our purpose.  With my uncle John now gone, I will continue to wear proudly their uniforms so they will never be forgotten by anyone, including this man.

Even at 89, John knew what price for freedom our boys have paid.
The expression in his face shows the seriousness of his patriotism.

When John and I went somewhere, we always made new friends.
It was cold out so as the sun went down we hustled back to the car
and had a nice meal before returning back to his home in Alexandria.

Well these are the last pictures of Johnnie and I in D.C.  Taken with my Sony Mavica 88 Camera it was obvious that in comparison to those above shot by a camera using a smart card rather than a floppy disc that I need to upgrade.  I did about a 6 months later as I prepared to go to France to correct Amin's headstone, but it was too late to capture Johnnie at any of the Memorial's around D.C..  None the less, it still captured the feeling and emotion we gave out to everyone we met on "our missions".  One of the last pictures I took of Johnnie is below.  There were many times that he was soldier, many times a comedian and as in the picture below a little bit of both.   He made a difference, someone anyone could look up to, and in doing so, touched the lives of so many people. 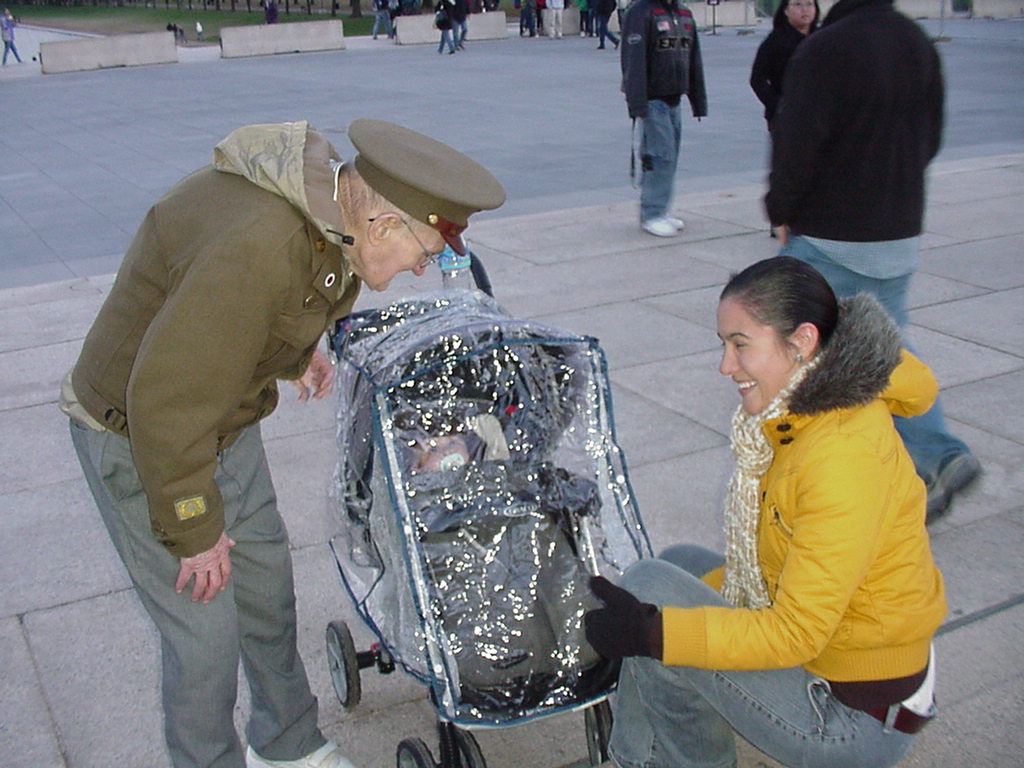 Click tent to go back to front page or
the Memorial Garden to visit my WWII Memorial Photo Gallery.