Music dedicated to all WWII Veterans.  Thank you, all of you, from all of us. 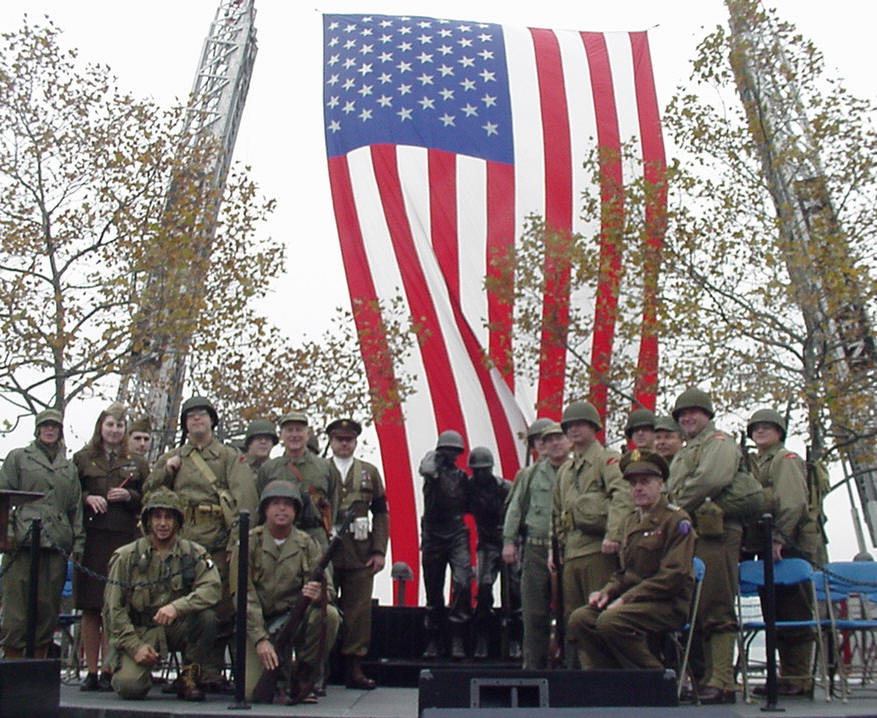 (Excerpts from a letter of thanks to my friend and fellow Patriot) -  Dear Mike.... I cannot express to you my sincere appreciation to you, for not only writing such an accurate accounting of yesterday (see below), but for being the signalman and driving force behind the collection of great Patriots that were on hand yesterday.  I know that the Veterans appreciated our presence as well as the organizing committee.  How fortunate for all of us to be a part of this great day!  Thank you! 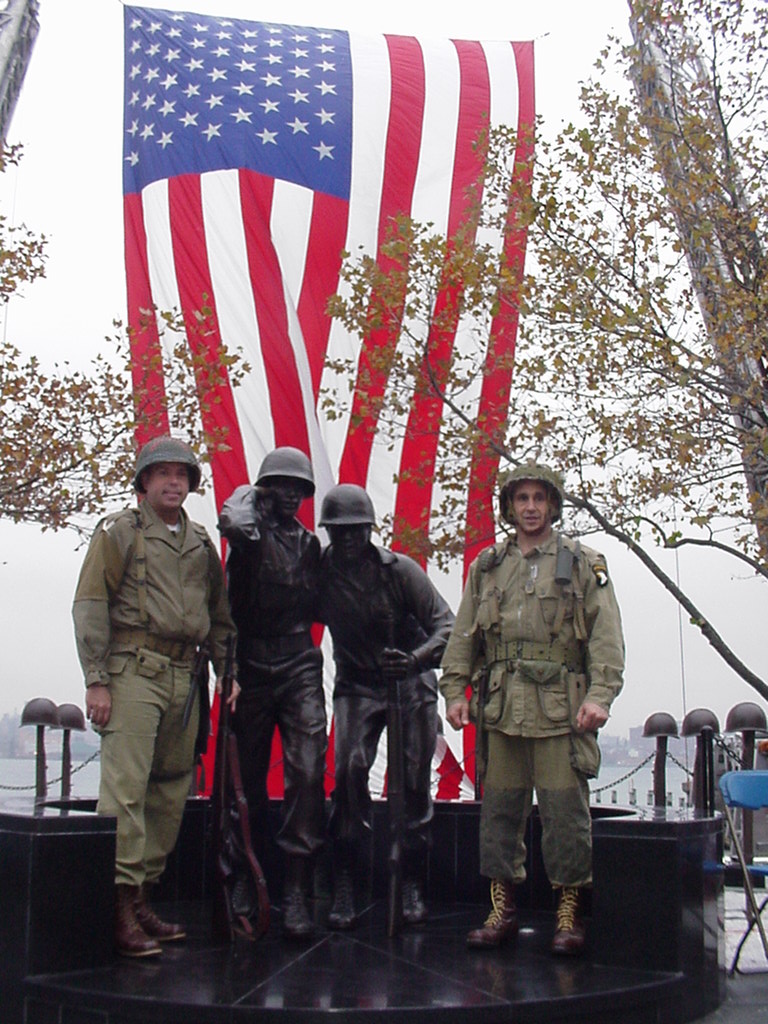 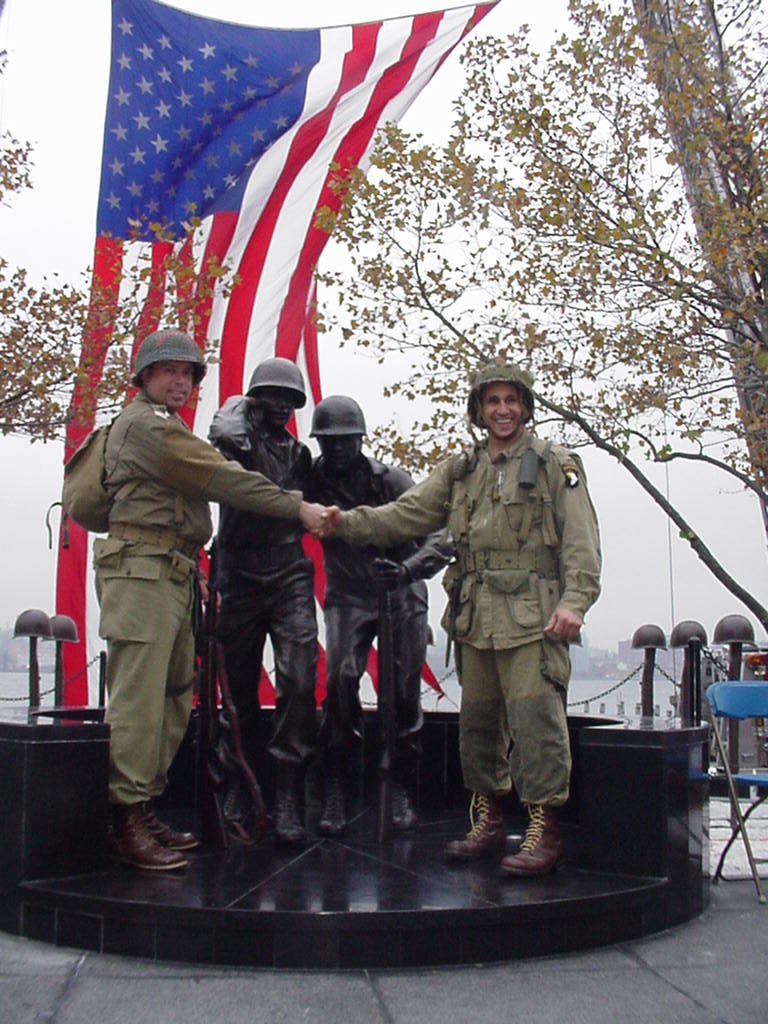 As I was leaving for home I overheard one committee member ask John Carey, the spokesman for yesterday's ceremony, "Where did you find those guys?" Immediately my thoughts were on you my friend. Thank you so much and thanks to all of you who braved the rain to stand "at the ready" regardless of elements. That in of itself spoke volumes to all the residents in attendance. I do believe that it was collective group that received the most applause at the end of the ceremony.

At one point, as the rain was coming down heaviest, you and I had a short but everlasting conversation. I said to you, "This is something that we will remember for the rest of our lives, when we are their age, it will be these moments that will make us most proud."

Let us remember the 159 names that were called and the tolling bell which released their souls back into their town, their names forever etched in their granite memorial. ---  Eric

It is with the utmost gratitude and privilege I have the opportunity to write this report. The only difficult part is figuring out where to start, only because every one stood out so well there was no one shining moment. The whole event was outstanding from start to end. I will begin with no particular pecking order as everyone truly and self sacrificing gave there all to make this event of Hoboken's WW II memorial a success despite the wind, rain, and distance.

"Gentleman I don't like it, but it's a go, so we go" and so they did changing the world and forever leaving an indelible mark on the pages of history and minds of us all. A famous quote from General Dwight D. Eisenhower giving the go ahead for Operation Overlord.

It started with a phone call from who I am proud to call my friend Eric Montgomery who dedicates much of his free time toward the remembrance of WW II Veterans and there history.   So many of which his family served with a particular attention to Coxswain Amin Isbir killed in action on Omaha Beach June 6 1944.  Eric Is a terrific guy of whom I thank for inviting us to this event of which his participation would have not made this possible. Eric's marching impression was of the 6th Naval Beach Battalion in honor of his Uncle Amin; a more fitting tribute could not have been made. Take the time to talk and get to know Eric better.  He does so much and has much knowledge of WW II history.

Spearheading of our ceremonial column and flag bearer of the over sized 5 X 9 Flag and 13 foot pole (My apologies) opposed to the traditional 3 X 5 flag on a 5 foot pole was Michael Ciaravino, a DSC recipient among other decorations and severe wounds from the Vietnam War.  He carried our nations vintage 48 Star Flag in un-wavering fashion.  Despite the much added weight and stress from wind and rain he did so with respect, dignity and perfect execution.  Adorned in his parade dress whites he always is our best dressed soldier.  We could not have had a better man for that task !!! Thank you Mike for your Iron man will.  At nearly 60 years of age in all wools including cover socking up more water than a bounty towel, how you held that flag as still as you did was beyond expectations.  Standing proud, you honored all. 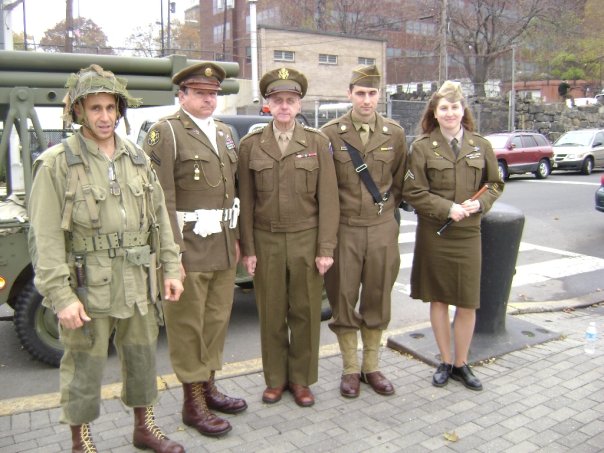 Friends Mike, Michael, David, Gerard and Kate
(Before the rain)

Then, following precision as equally as impressive with their magic of sound performance of Drum and Fife playing by Gerard Cortese and Kate Bolcar left me speechless. Kate adorned her grand-fathers Ike Jacket for the march.  He was with the 29th at Omaha beach.  Kate I am sure he was looking down with great pride and love that you had the respect to acknowledgement of his service to our country.

At that time I never imagined instruments could sound so spectacular all this also during a wind and rain front also unwavering.  I can only hope to hear you two play again as I so enjoyed your great skills, ear appealing music and dedication. Also standing and marching for hours in drenched wool socked clothes. Gerard the speed and sound of your sticks are amazing and even more appreciated as I tried to mimic you on my drum. I hope to get a few million pointers to even come close. Ah just amazing to listen to you two. 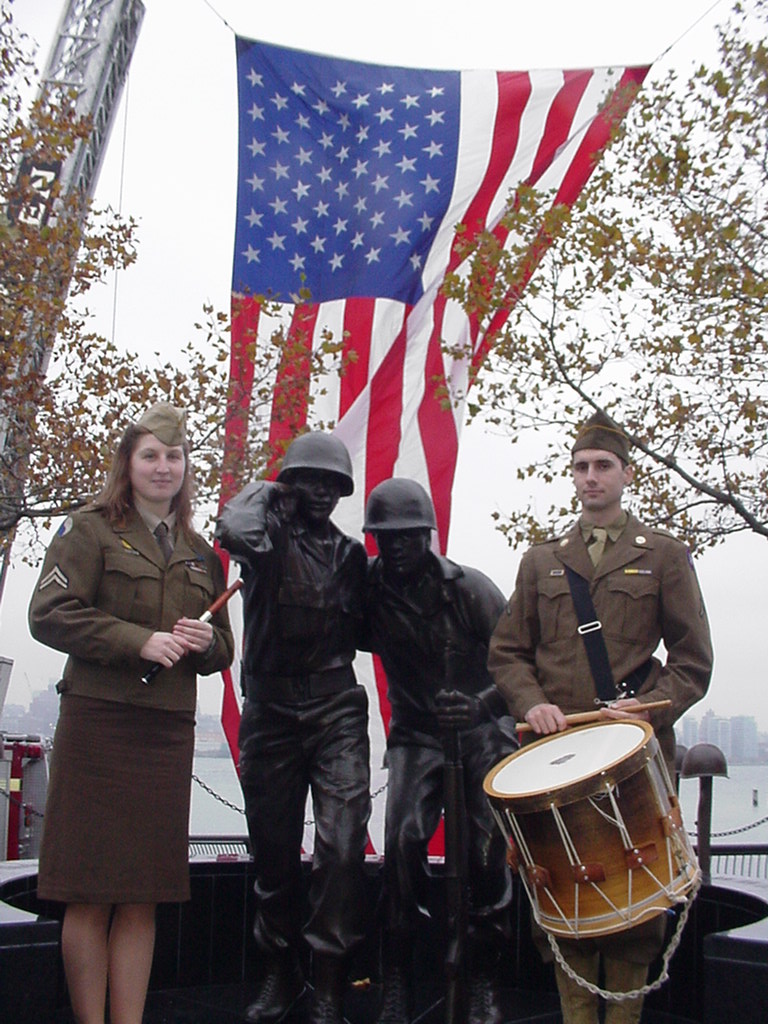 Music to our ears.  Kate and Gerard are now in the US Army!


In Then in tradition military escort the finest, most squared away, respected, do it all unit, I give you The 78th Lightning Division there aren't enough words to write about these fellows they are the premiere Living History Reenactors that set the bench mark for others to follow. Well known now for there precise, impeccable Ceremonial and Drill skills they are outstanding and a true pleasure to watch.  There training discipline and uniformity is second to none as is there encampments and static displays. They are a tight group that marches, dresses, sings, fights, eats and boy they can party all as one. So here is just some of there smart ass wit that I also love so much.  I barked an order to get this show on the road and I get a reply from a 78th man "Sir with all do respect we are on the road".  Looking down I then realized we were all standing in the middle of the street. 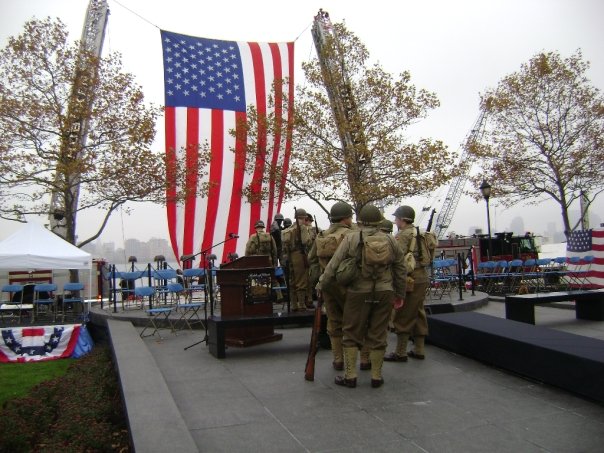 78th men make their way to the Memorial.  Thanks so much guys!


Then a careful inspection from General Eisenhower (Dave Gotard impersonating) followed.  The General asked another 78th man "when was the last time you slept soldier", his reply "I have narcolepsy sir I am sleeping right now." LOL I love these guys as does everyone.   It was their decision to stand fast and hold the line of excellence in the rain until the ceremony ended.   Just outstanding!

Following up were Jerry and Scott Nolan a super father and son team accompanied by there long time and loyal friend Bobby. These guys are just fun to be with and always good for a joke. They drove there vehicles a prime mover and jeep through bad weather and ferried the troops back and forth and gave the column that special touch of hear we are with presence with the 50 cal in a ring mount above the monster duce and a half.  They restore WWII vehicles and are just great guys. 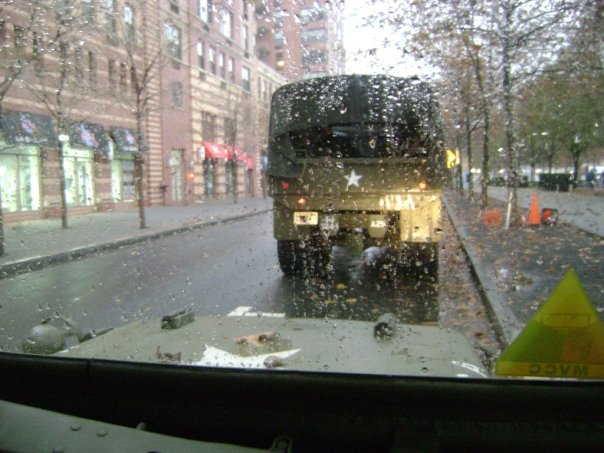 I also want to thank Chris Goring who gave up his sleep time going two days straight as he was going to work after the tough day in the rain. He did a Ranger impression and escort to the General standing big and tall over 6 feet made a formidable impression. Great seeing you again Chris and hope to see you again soon.

Now a humble man with a great demeanor (all people should be as nice as this fellow) that does a great Ike impression my friend Bob Gotart.  His inspection of the troops in the rain gave the event that touch that had the whole crowd watching . He came a far distance and bared the foul weather in a partially cover jeep . Bob and his son Dave (who had to work and could not attend) do many WWII Impressions and are active with the museum on Long Island . They are another father and son team that are a pleasure to be with and dedicate much of there time to Living History. 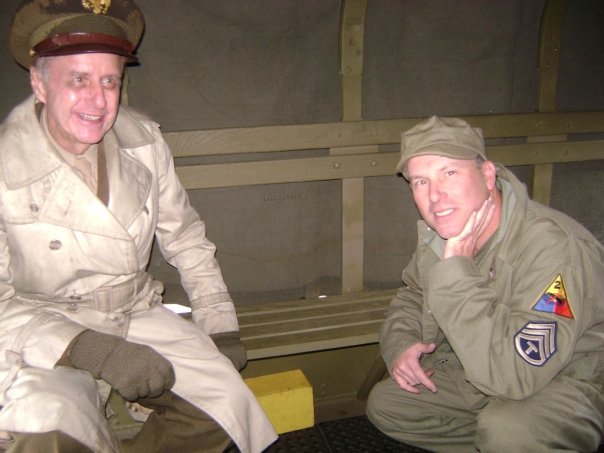 The only thing that upstaged all of you as individuals and made me the happiest was the mutual respect, comradery, and teamwork of people that did not know each other until that day. You worked together to from a great ceremonial column.  You put your egos aside to form something far better than any one person could be and that is a collaboration of a team.  You all made a great entrance to a special Memorial Statue that bears the symbolic nature of true American Heroes. Our Friends, Brothers, Fathers, Cousins, Uncles, Grandfathers our WW II Veterans.  You left such an impression that you were coordinately invited to come back to Hoboken's Memorial Day Parade that takes place a week a head of time leaving Memorial Day weekend open to you. 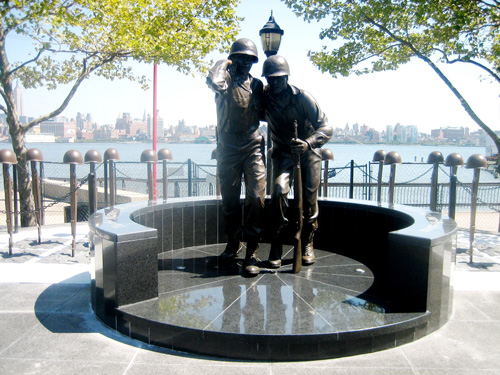 Thanks to all the other fellows that expressed the want and desire to come but were committed else where.

I would like to also thank the event organizer for inviting us, the dignitaries who made that statue possible and most of all the Veterans that made our world free.   ----  Yours truly, Michael A. Greco