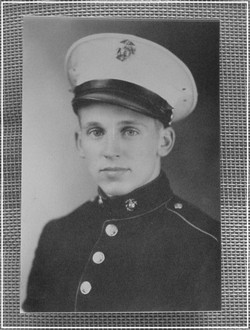 On a beautiful sunny 21st of April, 2007, Uncle John and I once again visited the WWII Memorial to share his story and to meet up with my friend Corporal Don Matthews from New York.  It was our 13th visit to the Memorial but Don's first, so I had a uniform prepared for Don's visit much like he would have worn in wartime.  Don and I share a common tie to the 28th Division.  Although I only reenact the unit, Don was in the very same company that my friends and I portray:  I Company, 110th Infantry Regiment.  So I was thrilled to have him meet John and do what I could to help Don enjoy his visit to the Memorial.  Dressed in Class A uniforms, seeming them together was a sight I will always remember.   We met Don, Senator Dole and snapped a bunch of pictures for so many proud citizens visiting the Memorial.  (Photo Gallery)   After Don and his Honor Flight group departed, Johnnie and I sat down for a rest in the shade near the Pacific Island campaign names adorned on it's granite walls.

Shortly afterwards a tall and handsome man in a blue suit, ribbons and medals proudly affixed, came over to where we were sitting and introduced himself.  "I'm Bud Hansen, United States Marine Corps, what sort of trouble are you boys into?"   Uncle Johnnie rose, gave a salute, and said, "Pleased to meet you sir, I'm John Gabersek and this is my nephew Eric Montgomery, and we didn't do it."  We all laughed and shook hands and got to know each other a bit.  A few moments later, Bud's wife Linda came over and introduced herself to John and I.  We all sat down and Johnnie and Bud started talking about their experiences in the pacific.   After a short visit of about an hour or so, we took some more pictures, met a few more veterans, said farewell and headed towards home.  On the way back, Johnnie commented to me how much he enjoyed meeting Don, Senator Dole and Bud and Linda.   Just something about this day made Johnnie feel so good: a great ending to a great day! 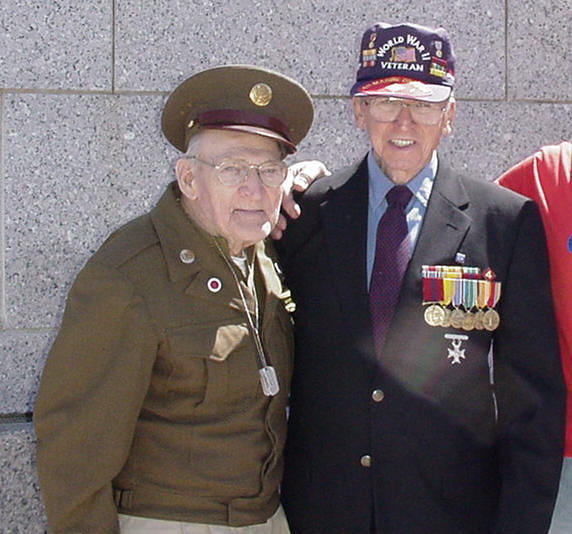 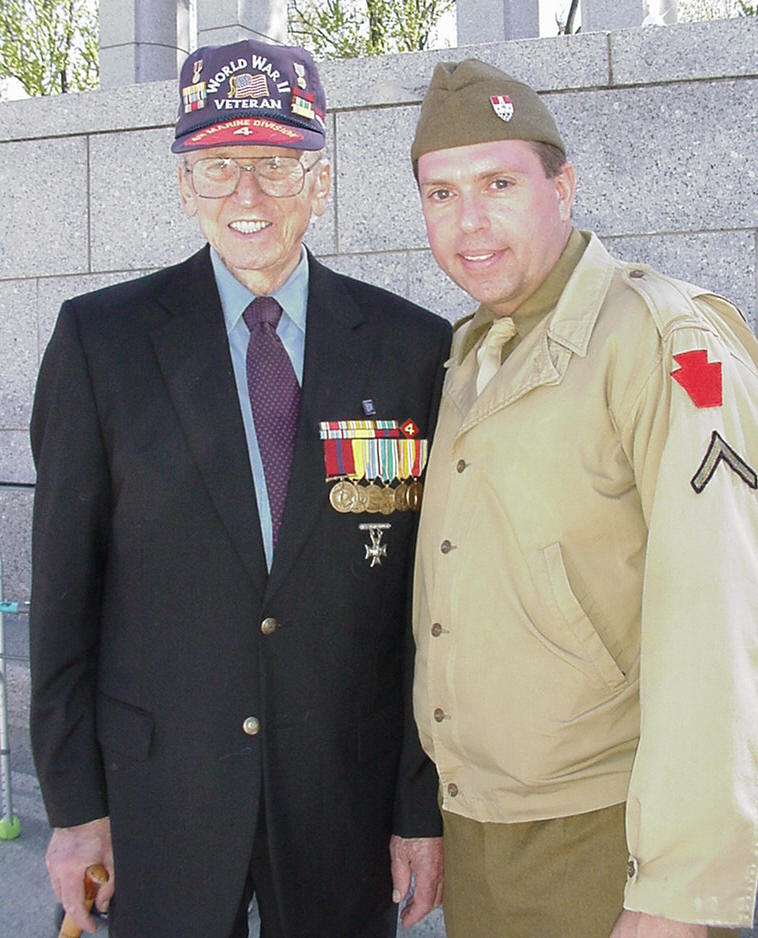 April 21, 2007, Bud Hansen with Johnnie and I, our first of three chance meetings at the Memorial.  (Photo Gallery)

Johnnie and I had met so many people at the Memorial and only a few times did we ever see the same person twice.  Usually they were the Park Rangers or volunteers which began to know Johnnie by first name since we had been there so many times.  The Memorial is a special place, one that John felt very comfortable visiting.  As it turns out so did Bud and Linda.  So a few weeks later on Memorial Day 2007, we met up with Bud and Linda again by chance!  How amazing...  Well, need less to say, Bud and Johnnie took up right were they left off just like they had been buddies some 65 years before.  It was really amazing to see them interact.  So I ducked out of sight for a while and sat down with Linda off in the corner.  We watched our two heroes, eyeballing all the ladies, telling jokes, laughing, just having a ball.  Seeing that was worth every penny I had spent driving all over creation to take John to the Memorial.  He had a new buddy, a familiar face, at a familiar place.  A place of honor and celebration of victory.  I think the picture below tells it all!  Careful ladies, those smiles are contagious! 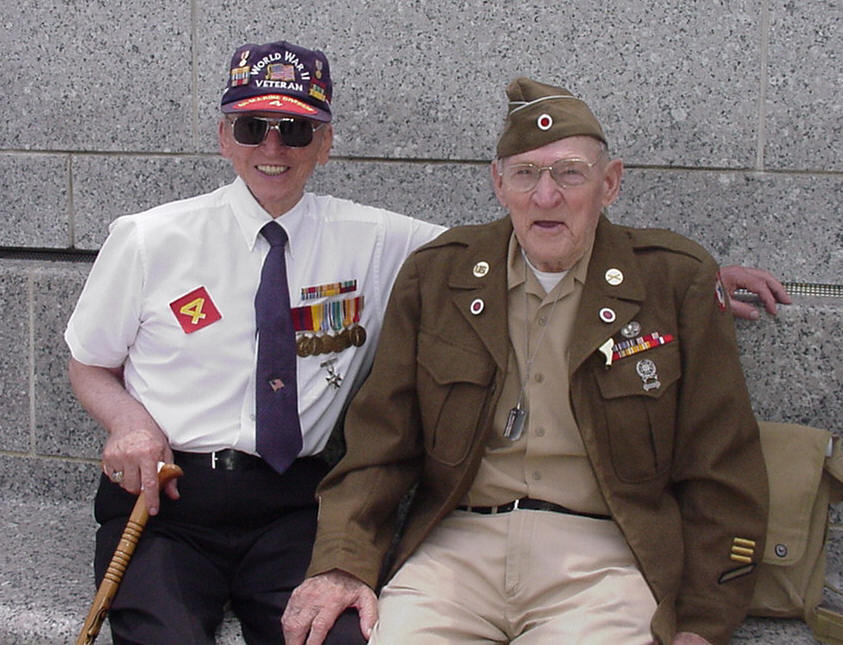 
As it turns out, Bud had been drumming up his own sort of trouble since 1943; literally.  Bud was assigned to the 1st Provisional Marine Detachment who were tasked to defend Londonderry Ireland from the Germans.  With no enemy in sight to fight, a number of the men took up studying the Irish culture and began the first Marine Corps bagpipe band in February of 1943. The detachment also recruited 6 local Irish lads to join the Marine Corps and they organized the smallest and the first Marine Corps Boot Camp held outside the continental United States!  These two events were Marine Corps firsts! 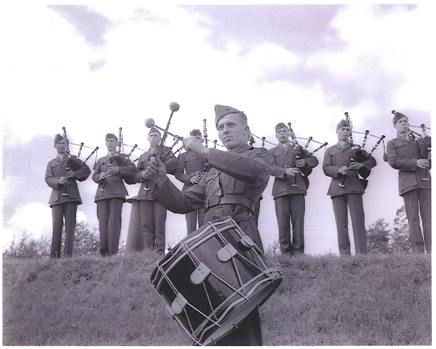 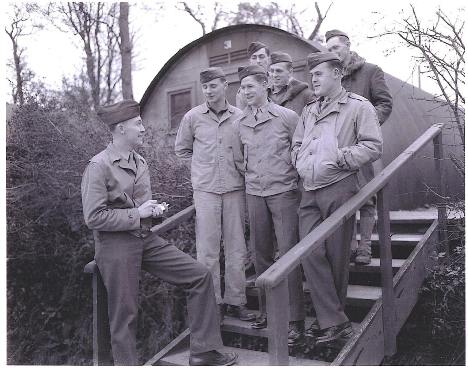 The band was trained by an Irish Regiment pipe band and the Marines became very good at it winning an award in an Irish Military competition.  The Detachment of Marines returned to Quantico after 27 months of service in Londonderry.   Before their departure to the Pacific the band became an instant favorite back here at home as well.  Below are 4 clippings of base news during their return.   Bud was then assigned to the 4th Marine Division and soon found himself on the island of Iwo Jima.  Bud was not a stranger to dangerous situations.  At the age of 16, he was part of the Merchant Marines and was onboard a freighter as they sailed the U-Boat infested waters of the North Sea.  The convoy was headed to Murmansk Russia.  The ship sailing in front of his was torpedoed and sunk.  Forbidden to stop, the convoy passed the survivors while they struggled in the frigid waters to stay alive.  It must have been a heartbreaking scene for the 16 year old. 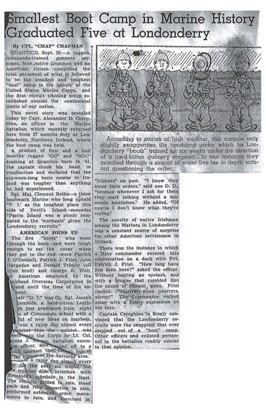 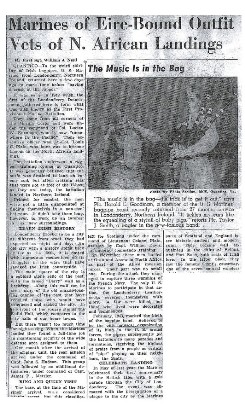 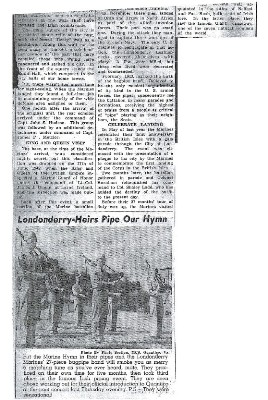 Quantico Virginia - Base newspapers report of the detachments achievements while in Londonderry.
Click each for a full sized view which will open in a new window!

63 years later, Bud Hansen was now making more noise with Uncle John, this time on Memorial Day, 2008, their last and unforgettable meeting at the WWII Memorial.  Personally, this was a day I will always remember as Johnnie and Bud again shared many a laugh, smile and joke.  The smiles on their faces placed a permanent mark upon my heart as the two held an American Flag, Army and Marines, celebrating their hard fought victory in WWII.  As John passed into history in November of 2009, I called Bud and Linda to let them know the sad news.  We stayed in touch since then with cards and the occasional phone call, but the times in which these great men were boys again at the Memorial are moments I will always remember.   Bud passed silently away on March 25th of 2011, yet I can still hear my heart beating strong in thought for those two heroes like the steady and true drumming that leads a patriotic tune.  Drum up a song for me Bud and Johnnie will sing along.   We will all hear it down here...

Services are being held through the http://www.moneyandking.com/ funeral home in Vienna Virginia. 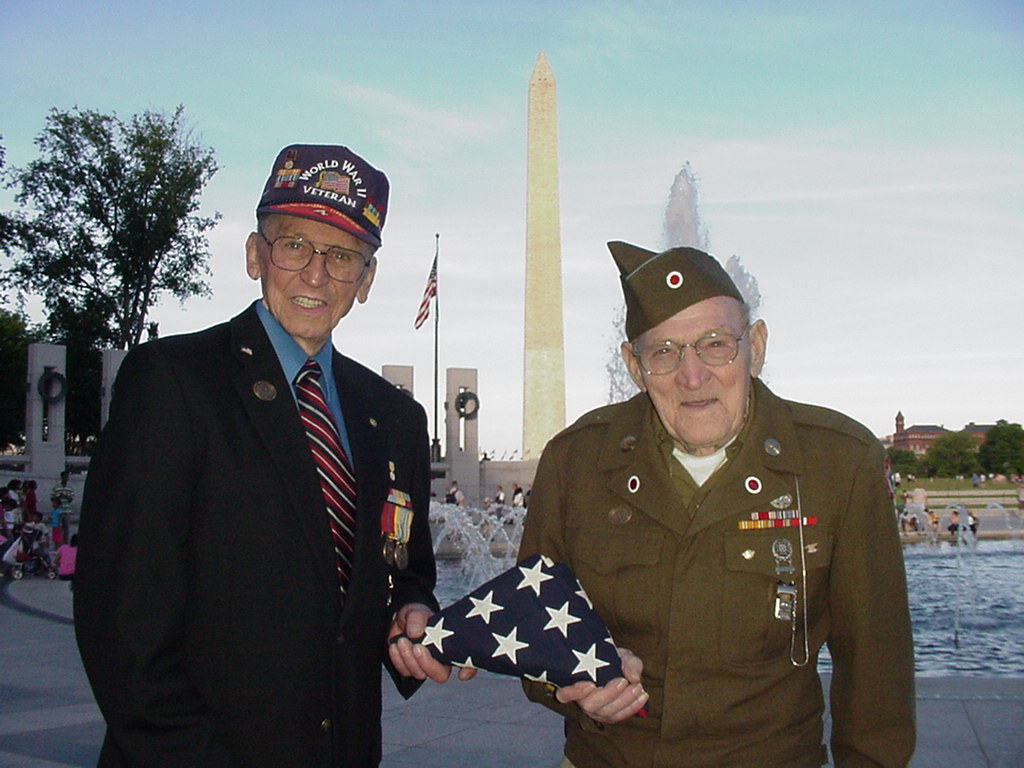 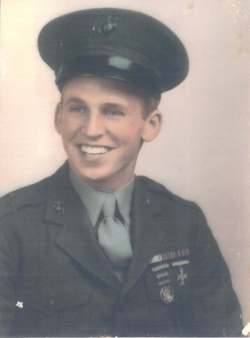 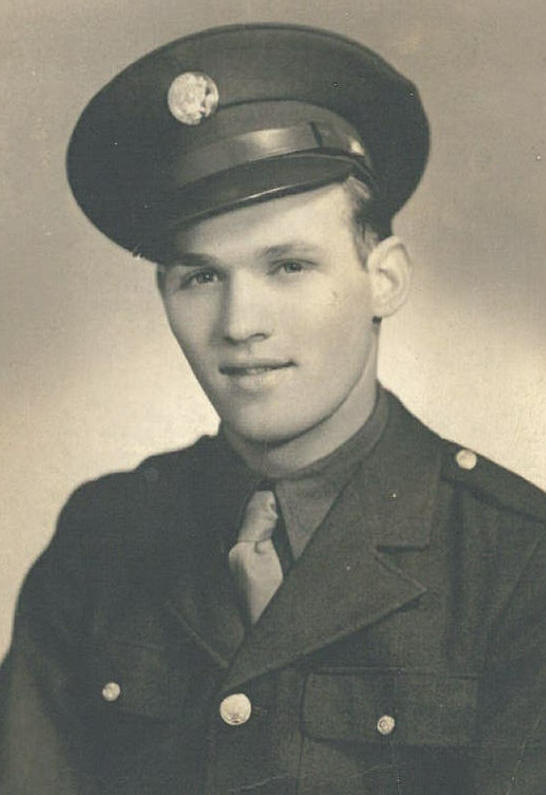 Rest in peace boys....and watch over us from above. 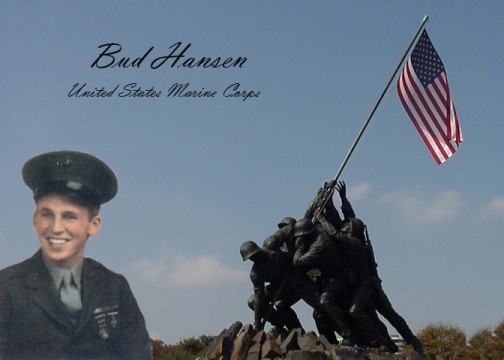 Bud Hansen's memorial service took place on the 2nd of April, 2011 in Vienna Virginia.  The service was attended by 4 generations of the Hansen's extended family and beautifully officiated by ministers and clergy of his church in West Virginia.  A Honor Guard from Bud's combined American Legion and VFW posts rendered honors within the confines of the chapel.  Burial at Arlington National Cemetery is pending and is expected sometime in April.  At the service, I met so many wonderful and loving members of the Hansen family as well as friends which Bud made over the years.  The resounding theme in which all the speakers conveyed was that Bud was a man of many talents but none better than to find a why to make you smile, laugh and appreciate all the simple things life has to offer.  He, and my great uncle John, were men cut from the same cloth.  How blessed I have been to know them both.   Below you will find some photos that I took at the memorial service. 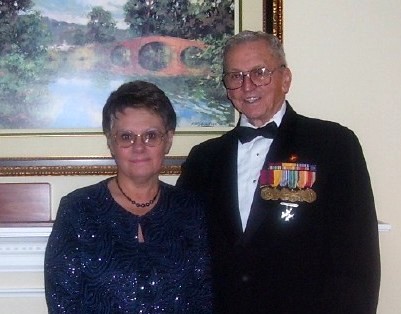 Wilfred Jr. at the Memorial Service pictured with his dad's uniform and portraits.
From 1942, Bud's first wife Bette and daughter Joan in 1942.

Kindly click on each photo for the larger version.