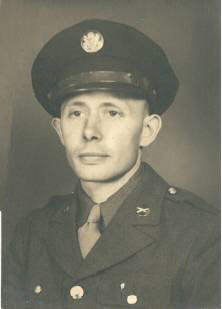 Husband to my Great Aunt Emma Gabersek, sister of Johnny and Frankie, Uncle Reid served with the Army in the Pacific with the 706th Ordinance Light Maintenance Company.  He entered the service on December 27th, 1944 serving until August of 1946.  He quickly gained the rank of Staff Sergeant organizing Motor Pool personnel to repair vehicles after battle.  Although Uncle Reid’s duties did not put him in harms way, he certainly saw first hand the results of war.    I have good memories of Uncle Reid, visiting my boyhood home in their oversized Airstream Trailer.  That silver bullet seemed as big as the Hindenberg to me as it sat in our driveway.  Taking his repair skills from the Army, he made his living as Diesel Engineer working for General Motors in Michigan.  Uncle Reid and family visited McKeesport as often as possible, but like most families, and as time by, those good old days pass into history.  I have since renewed my kinship with my long lost cousins while working on this tribute.  Sadly, Uncle Reid died in 2000 followed shortly by Aunt Emma.  He is survived by sons Darren and Duane, who have lost brother Regis in 2006.

Taken verbatim from Uncle Reid's discharge papers as it reads:  "Foreman, Automotive Repair Shop--Served with the 706th Ordinance Maintenance Company in the Pacific Theater of Operations.  Supervised 4 machinists and 24 mechanics and welders in duties concerned with making general repairs to all types of military vehicles up to 10 tons in size and construction equipment and the machining of parts and in repair and maintenance work.  Kept shop records, assigned men to duties, checked work of men.  Requisitioned supplies and equipment used by shop." 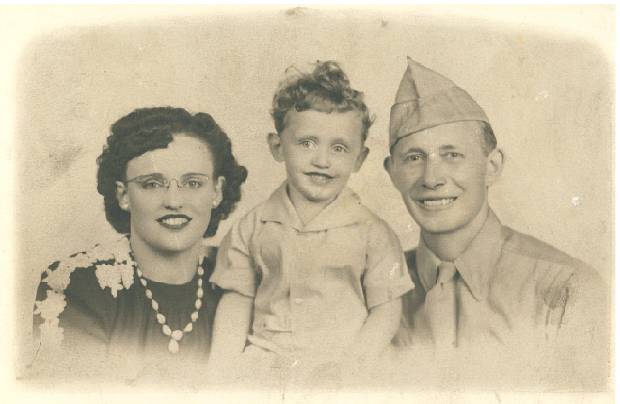 Emma, Regis, and Reid Smith Rest in Peace
Aunt Emma is the sister of Johnnie and Frankie Gabersek. 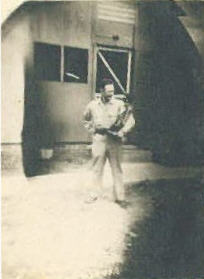 I have no idea what Uncle Reid is holding.
A penguin, monkey, a transmission?